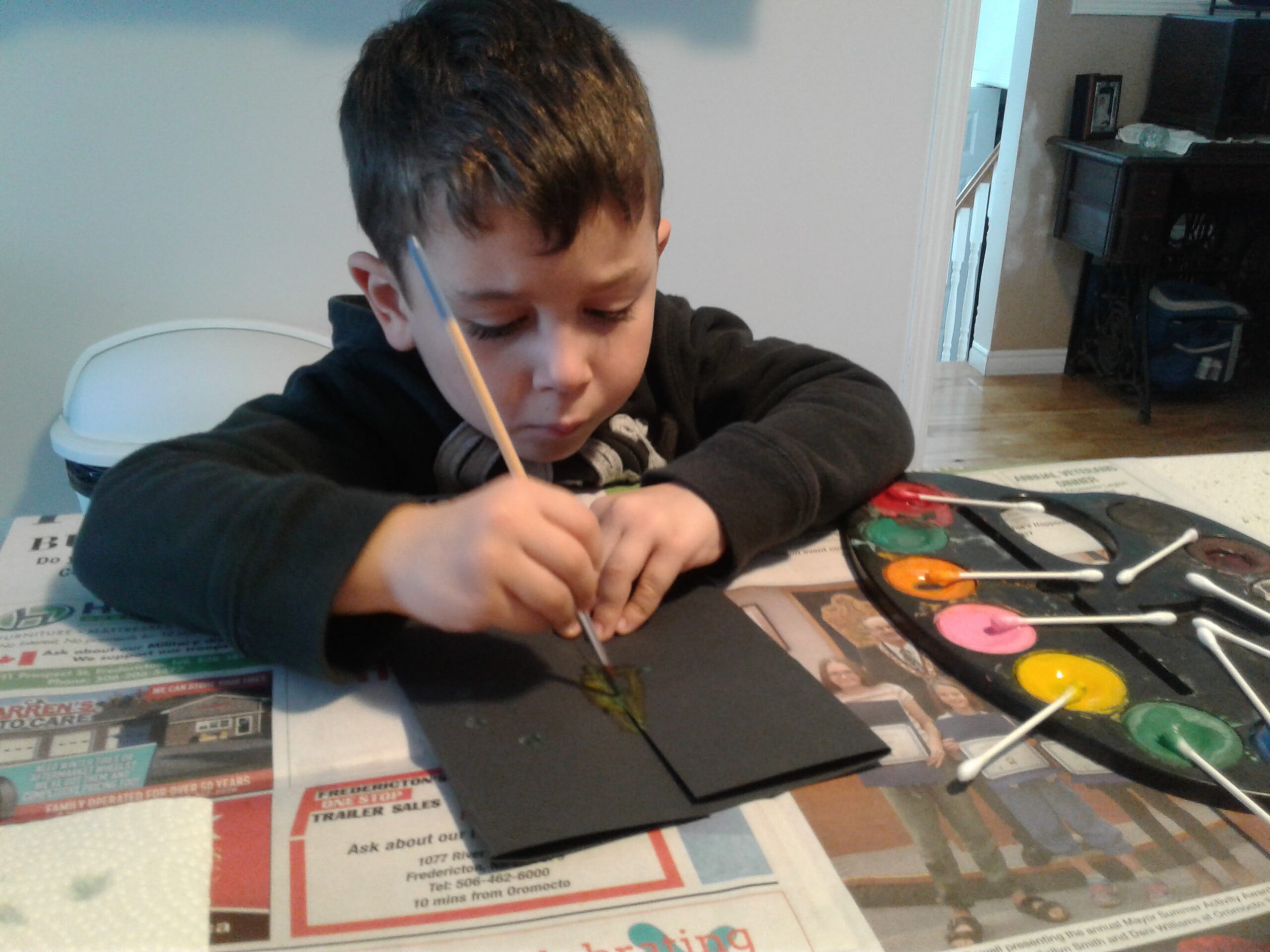 Our five-year-old grandson was diagnosed with Type 1 Diabetes in June. It is now January and we finally had that coveted sleepover. Before his diagnosis, this was something we enjoyed frequently. We would often have Alex and his two older sisters over for the night or even the weekend at times. Type 1 Diabetes put a damper on that for a while, but only until we gained the knowledge and confidence to meet his medical needs. Many things were very different from our pre-diagnosis sleepovers.

It is Finally Sleepover Day 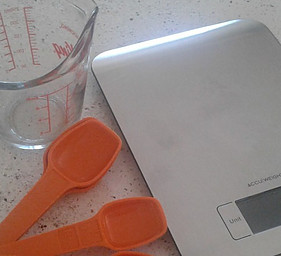 While we had done the carb counting when we had our daughter and her family over for dinner or when he came over at lunch after school on Fridays while his parents were still working, this was different.

We were on our own, yes our daughter was just a phone call away but she wasn’t there hovering, watching our every move. To say I felt the pressure to ensure I got it right so I could accurately dose his insulin would be a vast understatement. I would never get over it if I gave him too much insulin and something were to happen because of it.

I know our daughter and son-in-law live with this fear daily. They are doing a great job and have adjusted to their new normal beautifully.

Long before the day of the sleepover, I planned the meal based on what I knew he would like and actually eat most of.

Our grandson arrived before supper so we were able to have some fun playtime before the business of a meal had to get things a little more serious.

I made sure to do the finger poke immediately before mealtime because I needed to know where his blood glucose levels were right at that moment before eating.

Pre- calculating the carbs before he actually ate was helpful. So his portion was weighed and calculated before it was given to him. He actually ate all his supper which is rare and eliminated having to weigh leftovers to recalculate the carbs eaten.

As a typical five-year-old, our grandson is not a fast eater so of course, we are after him to stop talking and eat. This is so we can get his insulin into him promptly so we can try to control the inevitable post meal blood sugar spike.

I knew our daughter would be nervous about us doing this on our own so I texted her all the numbers and told her how much insulin I intended to give our grandson. She verified that was correct which eased all of our minds. The injection went well with no tears from anyone, not even me. That was a surprise.

We played games, built Lego cities (Alex has newer Lego at home, ours is a combination of my brothers from our childhood and our kids when they were young), and watched a movie. As usual, we kept a close eye on Alex’s blood glucose. 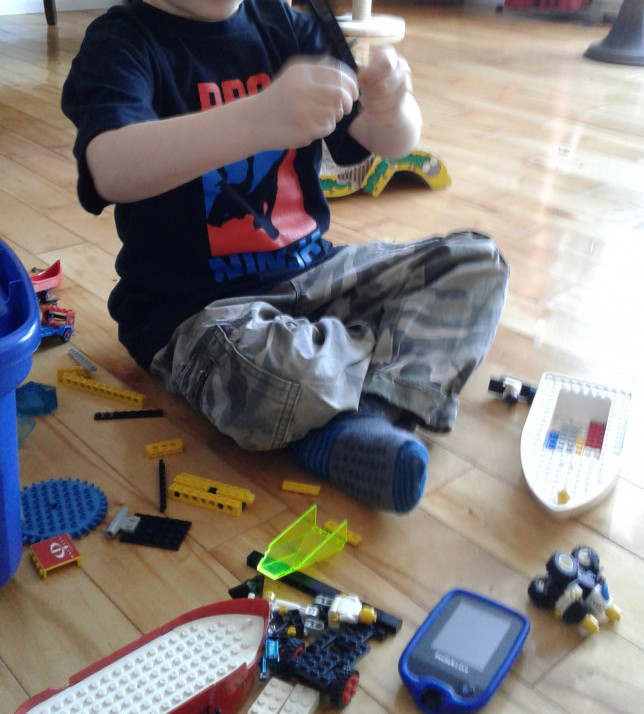 This was a simple task because he uses an automatic blood glucose monitor system which is as simple as scanning the reader over the little disc on his arm. We were aware that this reading has a fifteen-minute delay.

This means that when we scan him it is actually telling us what his blood sugars were fifteen minutes ago. It usually shows the number but also an arrow up, down, or straight across. When this number is low we usually do a finger poke to determine a more accurate reading.

This part was quite different from other sleepovers in that I needed to get up every hour and do a quick scan to ensure he wasn’t dropping too low as is his tendency. I set an alarm on my phone and got up scanned him and went back to bed. I seemed to go back to sleep without a problem.

Around 2 am I discovered he was going rather low. I did a finger poke which confirmed he was quite low. I gave him a few sips of apple juice which he does without fully waking. This brought him up enough and his blood glucose remained stable the rest of the night.

Between 6:30 – 7:00, it was time to give our grandson his long-acting insulin shot. I had never given him this one. It is a larger dose than his usual mealtime insulin. This shot did not go quite as smoothly as it is uncomfortable for him. We believe that is because it is a large dose being injected or maybe just because it is a different type of insulin.

Either way, it is so hard to give him that shot while he is crying, which breaks my heart. It is heart-wrenching to know that his very life depends on our ability to give him these shots. It is very scary to realize that our grandson’s life literally is in our hands but we got through it and we went back to sleep for about an hour.

Every sleepover we ever had with Alex before the diagnosis of Type 1 Diabetes he always wanted to make pancakes. I saw no reason to change that. Before our sleepover, I had found a great recipe for pancakes made with coconut flour so they are lower in carbs. He was so excited about this and together we made pancakes like usual. We put strawberries in our pancakes and topped them with whipped cream slightly sweetened with Splenda. They were a hit, we all enjoyed breakfast.

Because the batter is more delicate than traditional pancake batter, it’s important to make smaller pancakes (1/4 cup) so you can flip them easily.

I added cut up strawberries to my batter for additional flavour. Any type of berry will work or they are just as good plain.

There are plenty of other breakfast ideas in the “The Ultimate Diabetic Cookbook“, or in “Company’s Coming Diabetic Cooking“.

As an Amazon Associate, I earn a small commission from qualifying purchases, this in no way increases your cost.

This time we opted to have just Alex so we could focus solely on him. Next time maybe we will have his sisters as well, just like old times, and maybe even take them for an overnight adventure on the sailboat in summer.

It is definitely worth the time it takes to learn to calculate carbs, monitor blood glucose, and administer insulin injections. We thoroughly enjoyed our time with our grandson and he enjoyed time with us. We are definitely looking forward to next time.

Thanks for stopping by, leave your comments or questions below and I will respond.

2 thoughts on “Sleepover with Our Type 1 Diabetic Grandson”